When creating a new instance (VM) on OpenStack with one of the standard Ubuntu Cloud images, the next step is typically to install packages and configure applications. Instead of doing that manually every time, OpenStack enables automatic setup of new instances using Cloud-init. Cloud-init runs on first boot of every new instance and initializes it according to a provided script or config file. The functionality is part of the Ubuntu image and works the same way regardless of the cloud provider used (Amazon, RackSpace, private OpenStack cloud). Cloud-init is also available for other distributions as well.

Perhaps the easiest way to get started is to create a standard Bash script that Cloud-init runs on first boot. Here is a simple example to get Apache2 up and running:

This small script installs the Apache2 package and enables the default site. Of course, you’d likely need to do more configuration here before enabling the site, like an rsync of web content to document root and enabling TLS.

Use the nova CLI command to launch an instance named “web1” and supply the filename of the customization script with the “–user-data” argument:

To access the instance from outside the cloud, allocate a new floating IP and associate it with the new instance:

The new web instance has Apache running right from the start, no manual steps needed: 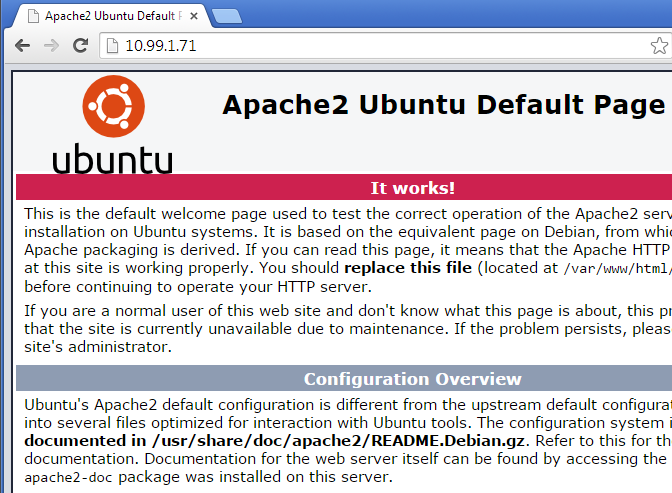 Cloud-init can do more than just run bash scripts. Using cloud-config syntax many different actions are possible. The documentation has many useful examples of cloud-config syntax to add user accounts, configure mount points, initialize the instance as a Chef/Puppet client and much more.

For example, the same Apache2 initialization as above can be done with the following cloud-config statements:

Including scripts or config files

Including a script or config file from an external source is also possible. This can be useful if the config file is under revision control in Git. Including files is easy, just replace the script contents with an include statement and the URL:

The gist contains the same cloud-config statements as above, so the end result it the same.

Cloud-init logs messages to /var/log/cloud-init.log and in my tests even debug level messages were logged. In addition, Cloud-init records all console output from changes it performs to /var/log/cloud-init-output.log. That makes it easy to catch errors in the initialization scripts, like for instance when I omitted ‘-y’ to apt-get install and package installation failed:

The line “Do you want to continue? [Y/n] Abort.” is a clear indicator that apt-get install failed since it expected user input. Most CLI tools can be run without user input by just passing the correct options, like ‘-y’ to apt-get. After correcting that error, the output is as expected:

This also reveals that the command “a2ensite 000-default” is not needed since the default site is enabled already. However, it’s included here as an example of how to run shell commands using cloud-config statements.